at the Bramble - October 4th

The Blue Ridge Pottery Club is passionate about hand-painted pottery! Blue Ridge Pottery was once made in Erwin Tennessee by Southern Potteries Incorporated in the early to mid-twentieth century. The Carolina, Clinchfield, and Ohio Railroad selected Erwin, TN in 1916 for the Southern Potteries plant.  They started their operation in 1917 and closed their plant in 1957.  The railway company delivered supplies to the plant and also shipped finished Blue Ridge Pottery to famous department stores throughout the north and south.  The railway company installed a spur directly over to the pottery for their convenience.  The US Post Office also opened a branch office inside the pottery due to the heavy amount of pottery being mailed out.

Come join us! To become a member of our club just come to the meeting or send $10 to our Treasurer, Erwin National Blue Ridge Pottery Club, 404 Rock Creek Road, Erwin, TN 37650.

Thank you for contacting us! If needed, you will hear back within 48-72 hours. 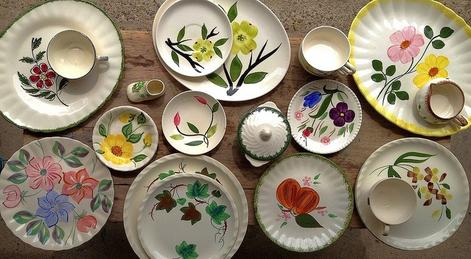 WE ARE BACK AT THE CLINCHFIELD SENIOR ADULT CENTER, 220 UNION STREET, ERWIN, TN.  WE WILL BE MEEING ON THE FIRST MONDAY OF EACH MONTH THROUGH DECEMBER UNLESS IT HITS ON A HOLIDAY.