This is the tray that Mike Sorenson made for me.  I thought that I had French Peasant plates but it turns out that Jay Parker's new collector's book shows that plates with the red or blue trim are "Harvester" plates.  If you bought his book called "Southern Potteries Blue Ridge Dinnerware, A Primer for Collectors Old and New" look on page 124.  His book is a wonderful collection of history, photos and information.  June 3, 2022

During the last hour of the Cash show they had an auction.  Quite a few people showed up for the auction.  Each piece had to be at least $5.  As you can see, I was taking photos instead.  The show had about 50% Blue Ridge Pottery and 50% Cash Pottery.  This is a very organized club with dedicated members. 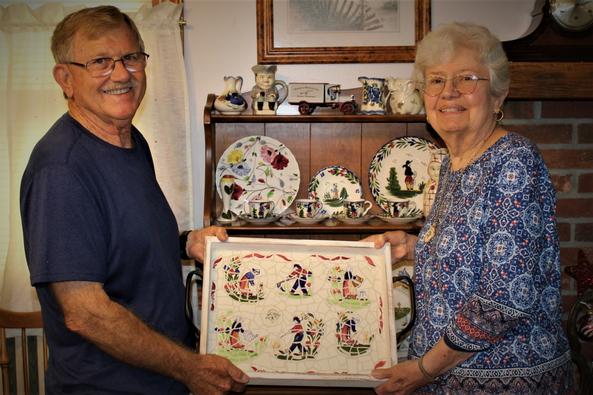 The Cash Pottery Show really included some fine pottery.  They had plenty of Cash Pottery and I saw some great pieces of Blue Ridge Pottery too.

The most interesting item to me was a large framed photo of the original Blue Ridge Painters shown by Rocky Tilson, Vendor.  Mike Riddle happened to stop by Rocky's table and recognized his mother, Lucy Riddle in the photo, third woman from left on back row.  I talked Mike into buying the photo and, of course, he did.  I'm sure he planned to anyway.