Lisa Bailey introduced Elizabeth Bunton who told the story of her father, Otis Bunton, who drove the Trailways bus that picked up Southern Potteries Employees and took them back home.  Read the rest of the story above. 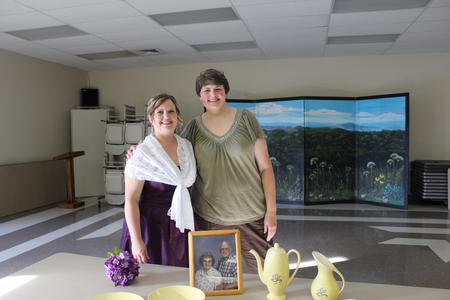 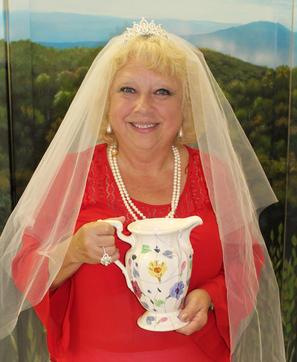 Our new club President Gina Clark handed out the agenda for the meeting.  We had the winner of the $500 scholarship visit with his dad.  Trey Hatcher from the Unicoi County High School, Erwin, TN  won the award this year. See the Scholarship Section for photo.  Our theme this month was Wedding.  The good sports came dressed in their Wedding attire as you will see in the following photos.  Our monthly buffet was splendid.  Lots of variety.  We had a special speaker Elizabeth Bunton telling us of her father and what he did for the Southern Potteries - Otis Bunton drove the Trailways bus that picked up the Southern Potteries workers from all around the area, including the mountains and drove them back home.  When he and his wife got married in 1955 the workers on their lunch hour painted a special pattern for their wedding.   The Vendor's dinner was discussed and it was decided that the Hawg and Dawg would cater the event at the Bramble.  The door prize, a Chintz pitcher was won by Dianne Banks. Dianne brought her original wedding bouquet.